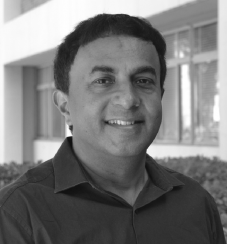 Dr. George Varghese made significant contributions to the usability of the Internet by inventing algorithms that increase its speed. By combining the strengths of disparate computing components, he also laid the foundation for a new way of thinking about resolving bottlenecks and making networks faster. Dr. Varghese’s textbook on the concept, Network Algorithmics: An Interdisciplinary Approach to Designing Fast Networked Devices, first published in 2004, has sold over 4,000 copies.

Beginning in 1990, Dr. Varghese’s work centered around routers and attempted to improve network speed beyond that of the Internet protocol suite, or TCP/IP, model. His work resulted in improved speed for Internet Protocol (IP) lookups, packet classification, and packet scheduling. Later, while working at Cisco Networks, he rethought the use of standard algorithms in chips by addressing router hardware.

Challenged by the problem of increasing speed as the Internet scaled, Dr. Varghese’s interdisciplinary thinking focused on the concept of Network Algorithmics. The field requires knowledge of hardware, operating systems, and algorithms, as well as the intellectual flexibility to understand how the strengths of each can work together to address bottlenecks. Dr. Varghese approached his work with that knowledge and intellect, along with a willingness to challenge established solutions.

In addition to writing the field-defining textbook, among Dr. Varghese’s contributions to Network Algorithmics is the widely used scheduling algorithm Deficit Round Robin (DRR), which he invented with M. Shreedhar. DRR is used in Cisco Gigabit Switch Router (GSR), the most popular router in the Internet core. He is also the co-inventor, with Tony Lauck, of timing wheels, an algorithm for fast timers that is used in the Linux and FreeBSD operating systems.

Varghese is credited with having led a renaissance of research into algorithms for speeding up the Internet in both software and hardware implementations. Through his unique approaches, he influenced a generation of engineers to think about new ways to move data.