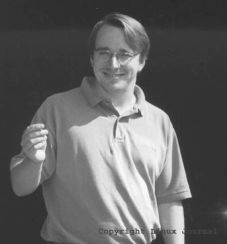 As Wired magazine wrote in 2003, “He posted it on the Internet and invited other programmers to improve it. Since then, tens of thousands of them have, making Linux perhaps the single largest collaborative project in the planet’s history.” Linux now serves as the primary foundation of Open Source used by Internet developers and companies today.

Torvalds has carefully overseen the development of Linux since its inception. In 2003, he focused exclusively on the kernel, backed by the Open Source Development Labs (OSDL), a consortium formed by high-tech companies which included IBM, Hewlett-Packard, Intel, AMD, RedHat, Novell and many others. The purpose of the consortium was to promote Linux development. OSDL merged with The Free Standards Group in January 2007, to become The Linux Foundation. As the self-described “benevolent dictator of Planet Linux,” Torvalds remains the ultimate authority on what new code is incorporated into the standard Linux kernel.

Read Wired’s profle on Torvalds’ historic contribution to the Internet