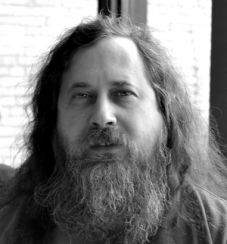 Dr. Richard Stallman (stallman.org) launched the Free Software Movement in 1983 by announcing the plan to develop the GNU operating system, intended to be composed entirely of free (freedom-respecting) software (gnu.org/philosophy/free-sw.html).  He and others began developing GNU in 1984.

The last gap in GNU was filled in 1992 when Linus Torvalds liberated his kernel, Linux, resulting in the combined GNU/Linux operating system (gnu.org/gnu/linux-and-gnu.html) that is widely used today (gnu.org/distros). In 1985, Dr. Stallman founded the Free Software Foundation (fsf.org) and remains its president.

In the early 1990s, Dr. Stallman moved from software development to advocacy, campaigning for various issues of freedom in the computing field. In 1989 he founded the League for Programming Freedom, which campaigned against software patents and interface copyrights. He now campaigns against those injustices and others, such as Digital Restrictions Management, Internet surveillance and censorship, and the practice of entrusting one’s data or computation to servers run by companies.

From September 1974 to June 1975, he was a graduate student in physics at MIT; He worked at the MIT Artificial Intelligence Lab from June 1971 through December 1983. There he developed the AI technique of dependency-directed backtracking, also known as truth maintenance. In 1976 he developed the first extensible Emacs text editor. He graduated from Harvard in 1974 with a Bachelor of Arts in physics and has received many honorary doctorates and awards, including a 1990 MacArthur Foundation Fellowship.

Dr. Stallman’s acceptance speech can be viewed here. (Please note that this video is posted in the Ogg format. Ogg is a professional-grade, free-software media format that is not restricted by patents. If you are using Firefox you can play this video directly in your browser. If not, you can download the VLC Media Player, which will play Ogg files, here.)