Home / Inductee Highlights / Larry Landweber: At Play in the Lab of the World
14 May 2013

Larry Landweber: At Play in the Lab of the World

The 1980s were a time of all-out enthusiasm on the part of brilliant computer-science researchers who saw amazing possibilities for changing the world.

Larry Landweber brought them all together, setting off an explosion of synergy that resulted in the Internet we know today.

It was while teaching computer science theory at the University of Wisconsin at Madison in 1977 that Landweber began to see the mind-boggling implications of connecting some of the world’s great minds. For four years, he went into “learning mode,” as he calls it, soaking up knowledge and ideas from the nation’s top innovators in the field of networking.

In 1981, he obtained National Science Foundation funding to create the Computer Science Network (CSNET), which extended the benefits of networking to universities outside the Defense Department’s ARPANET.

Thanks to CSNET, scientists at hundreds of universities could now share ideas.

He didn’t stop there: He created a series of International Academic NetWorkshops (“the Landweber Workshops”) throughout the 1980s at which researchers and engineers shared the software they were developing in their own countries, and learned from one another.

“These people were to become the worldwide leaders in the spread of the Internet,” Landweber says. “It was a very exciting time. There were all these lively discussions and debates about technical approaches and implementation strategies. By 1989, everything was exploding, and so many people were asking to come to the NetWorkshops that we decided to hold a conference.”

That decision led in 1992 to the first of the INETs: the annual meetings of the Internet Society. Landweber, an ISOC co-founder, was then serving as Vice President for Education.

“The synergy was most exciting – reminiscent of the NetWorkshops. The INETs were the conferences for the Internet, where people from academia, industry and governments came to learn about this new technology,” he says.

Also in the 1990s, Landweber designed a sort of progress report on how technology was spreading: He created color-coded “connectivity maps,” showing the degree of networking available worldwide.

“I collected information from every nation in the world – as varied as Mongolia, France, Ecuador and the Faroe Islands – the types of network technology they had,” he recalls. “Some had not even begun to be connected to the Internet yet; some of them had email already and some had nothing.”

The maps showed at a glance which regions needed better connectivity, and this information led to many international development assistance initiatives. The maps also served as forerunners of today’s infographics.

Recently, he was asked what advice he’d give to students just beginning to delve into the computer technology of today: What’s the biggest challenge yet to be solved, and how should they set about addressing it?

“There are numerous big challenges,” he said. “Reaching the billions who are not connected; integrating new technologies (for example, sensors, mobility and cloud computing); securing critical infrastructure and personal privacy; researching new paradigms, like DNA and quantum computing; implementing human-like intelligence (for example, robotics, natural language translation); and inventing new paradigms that will change the world. The key is to learn all there is to know in your field and not be afraid to think ‘out of the box’ in pursuit of game-changing ideas.”

Looking back, Landweber says his career has brought him both a lot of satisfaction and a lot of fun. “We felt as if we were changing the world. Of course, the world didn’t know we were changing it — for the first 10 to 15 years that we were working on the Internet, the world mostly ignored us. But that’s why we were allowed to just go along and work in peace. And we got to work in this great big lab that was, essentially, the world.” 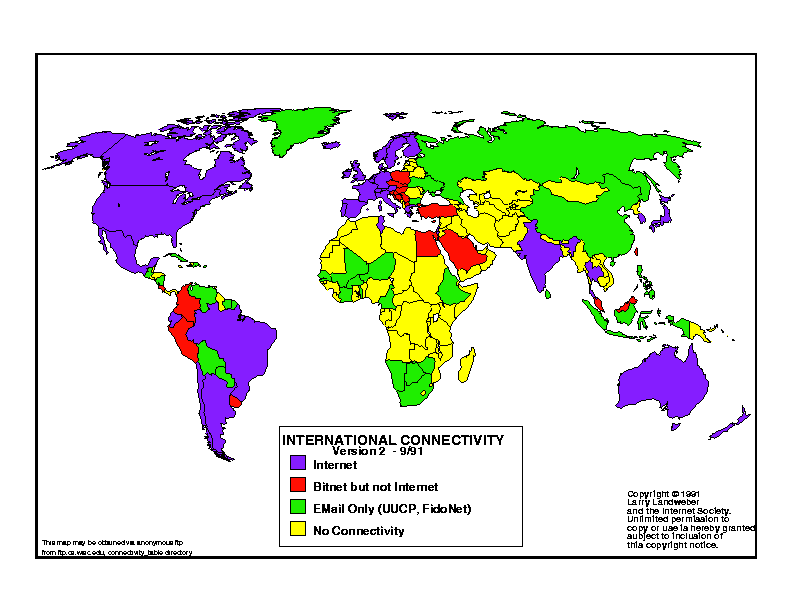 In 1991, inductee Lawrence Landweber began mapping the parts of the world that were connected…and the parts that were not (he had to manually insert the colors due to the limits of technology at the time) . The yellow parts show where there was no Internet connectivity. The green shows where there was only email. 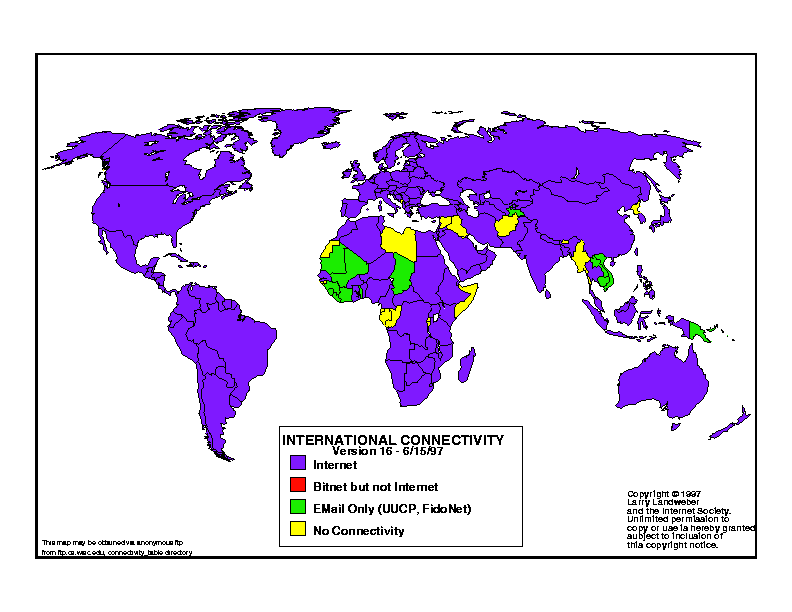 By 1997, much of the world was networked, according to Landweber’s maps.

Nancy Hafkin: Numbers of U.S. Women in IT Falling

Read More about Nancy Hafkin: Numbers of U.S. Women in IT Falling